Blueberries are flowering plants in the genus Vaccinium, sect. Cyanococcus. The species are native only to North America. They are shrubs varying in size from 10 cm tall to 4 m tall; the smaller species are known as “lowbush blueberries”, and the larger species as “highbush blueberries”. The leaves can be either deciduous or evergreen, ovate to lanceolate, and from 1-8 cm long and 0.5-3.5 cm broad. The flowers are bell-shaped, white, pale pink or red, sometimes tinged greenish.

The fruit is a berry 5-16 mm diameter with a flared “crown” at the end; they are pale greenish at first, then reddish-purple, and finally indigo on ripening. They have a sweet taste when mature, with variable acidity. Blueberry bushes typically bear fruit from May through October; “blueberry season” peaks in July, which is National Blueberry Month in the United States and Canada.

All species whose English common names include “blueberry” are currently classified in section Cyanococcus of the genus Vaccinium. Several other plants of the genus Vaccinium also produce blue berries which are sometimes confused with blueberries, mainly the predominantly European bilberry (Vaccinium myrtillus), which in many languages has a name that means “blueberry” in English. See the Identification section for more information.

Although blueberries are native to North America, they are now grown also in Australia, New Zealand and South American countries[1], and are air-shipped as fresh produce to markets around the world.

Beginning in 2005, blueberries have been discussed among a category of functional foods called superfruits having the favorable combination of nutrient richness, antioxidant strength, emerging research evidence for health benefits and versatility for manufacturing popular consumer products[3] [4].

Identification
True wild blueberries (section Cyanococcus of the genus Vaccinium) occur only in eastern North America. Other sections in the genus, native to other parts of the world including western North America, Europe, and Asia, include other wild shrubs producing similar-looking edible berries such as huckleberries, cranberries, bilberries and cowberries. These are sometimes colloquially called blueberries and sold as blueberry jam or other products.

The names of blue berries in languages other than English often translate as “blueberry”, e.g. Scots Blaeberry and Norwegian Blåbær, although those berries may belong to another species. For example, Blåbær and French myrtilles usually refer to the European native bilberry, while bleuets refers to the North American blueberry.

Aside from location of origin, blueberries can be distinguished from bilberries by cutting them in half. Ripe blueberries have white or greenish flesh, while bilberries and huckleberries are colored purple throughout.

Wild blueberries, smaller than cultivated ones, are prized for their intense color. The Lowbush Blueberry, V. angustifolium, is found from Newfoundland westward and southward to Michigan and West Virginia. In some areas it produces natural blueberry barrens, where it is practically the only species covering large areas. Several First Nations communities in Ontario are involved in harvesting wild blueberries. Low bush species are fire-tolerant and blueberry production often increases following a forest fire as the plants regenerate rapidly and benefit from removal of competing vegetation.

There are numerous highbush cultivars of blueberries, each of which have a unique and diverse flavor. The most important blueberry breeding program has been the USDA-ARS breeding program based at Beltsville, Maryland and Chatsworth, New Jersey. This program began when Dr. Frederick Coville of the USDA-ARS collaborated with Ms. Elizabeth White. In the early part of the 20th Century, Ms. White offered wild pickers cash for large fruited blueberry plants. ‘Rubel’, one such wild blueberry cultivar, is the origin of many of the current hybrid cultivars.

Rabbiteye Blueberry (V. virgatum syn. V. ashei) is a southern type of blueberry produced from the Carolinas to the Gulf Coast states.

Other important species in North America include V. pallidum, the Hillside or Dryland Blueberry. It is native to the eastern U.S., but common in the Appalachians and the Piedmont of the Southeast. Sparkleberry, V. arboreum, is a common wild species on sandy soils in the southeastern U.S. Its fruit are important to wildlife, and the flowers important to beekeepers.

Growing Areas
Blueberries were first cultivated in the United States by Elizabeth Coleman White in the South Jersey village of Whitesbog.

Maine produces 25% of all blueberries in North America, making it the largest producer in the world. Maine’s 24,291 hectares (FAO figures) [60,023 acres] of blueberry were propagated from native plants that occur naturally in the understorey of its coastal forests. The Maine crop requires about 50,000 beehives for pollination, with most of the hives being trucked in from other states for that purpose. Many towns in Maine lay claim to being the blueberry capital and several festivals are centered around the blueberry. The wild blueberry is the official fruit of Maine and is often as much a symbol of Maine as the lobster.

Quebec has the largest quantity of wild blueberry production, coming especially from the regions of Saguenay-Lac-Saint-Jean and Côte-Nord which provide 40% of Quebec’s total provincial production. Quebec has added 28,717 hectares in blueberry farms since 2001.[citation needed]

Nova Scotia, also a major producer of wild blueberries, recognizes the blueberry as its official provincial berry. The town of Oxford, Nova Scotia is known as the Wild Blueberry Capital of Canada. New Brunswick and Prince Edward Island are other Canadian provinces with major wild blueberry farming.[6]

Highbush blueberries were first introduced to Germany and the Netherlands in the 1930s and have since spread to Poland, Italy and other countries of Europe (Nauman, 1993).

“[M]any growers in France, Austria, and Italy realized too that it pays to cultivate highbush blueberries, and that good economic gain can be obtained,” according to an industry researcher. “Even in Belgium and Norway, some very promising trials with special methods of blueberry cultivation resulted in a limited commercial production which is very successful. … Except in the United Kingdom, Ireland, and Spain, a blueberry industry is developing in all regions where the production is possible due to the climatic and edaphic conditions …” (Nauman, 1993).

Blueberries were first introduced to Australia in the 1950s, but the effort was unsuccessful. “In the early 1970s David Jones from the Victorian Department of Agriculture imported seed from the U.S. and a selection trial was started. This work was continued by Ridley Bell” who imported more American varieties. In the mid-1970s the Australian Blueberry Growers Association (ABGA) was formed. (Clayton-Greene)

By the early 1980s, the blueberry industry was started in New Zealand and is still growing. (BNZ, n.d)

The industry is even newer in Argentina: “Argentine blueberry production has increased over the last three years with planted area up to 400 percent,” according to a 2005 report by the U.S. Department of Agriculture. But that increase comes from a tiny base of 400 hectares in 2001 (to 1,600 hectares in 2004). The industry is new in the country and farmers are still learning the business. “Argentine blueberry production has thrived in three different regions: the province of Entre Rios in Northeastern Argentina, the province of Buenos Aires, near the country’s capital city Buenos Aires, and the southern Patagonian valleys,” according to the report. (Gain, 2005)

Chile is the biggest producer in South America and the largest exporter to the northern hemisphere, with an estimated surface of 6,800 hectares (as of 2007). Introduction of the first plants started in the early 80s and production started in the late 80s in the southern part of the country. Today production ranges from Copiapó in the north to Puerto Montt in the south, which allows the country to offer blueberries from October till late March. The main production area today is the Bio Bio region. Production has evolved rapidly in the last decade, becoming the 4th most important fruit exported in value terms. Fresh market blueberries are exported mainly to North America (80%) followed by Europe (18%). Information from the Fruit Export Association (ASOEX, 2007), Chile exported in 2007 more than 21 thousand MT of fresh blueberries and more than 1,000 MT of frozen product. Most of the production comes from the highbush type, but several rabbiteye blueberries are grown in the country as well. Information taken from the Chilean Fruit Producers Federation (FEDEFRUTA, 2007) and their Blueberry Committee, stands that there are over 800 blueberry producers with surfaces ranging from 50 to 200 hectares.

Growing seasons
Blueberry production in North America typically starts in mid-May (in Florida) and ends in September, when some fruit is held over in controlled-atmosphere storage in Oregon, Washington and Canada. (Gaskell, 2006).

Sources give different periods for the growing season in the southern hemisphere. According to the University of California Extension Service, Chile, New Zealand and Argentina begin harvesting in the winter and continue till mid-March, when Chilean blueberries are held over in controlled-atmosphere storage for about six weeks. “As a result, blueberries reach annual peak prices in mid-April.”(Gaskell, 2006)

In Chile, San Jose Farms, which says (according to its Web site) that it is one of the oldest blueberry producers in the country (it started in the early 1990s), states that its harvest season starts in November and continues through March. (San Jose, n.d.)

In Argentina: “The marketing year (MY) for blueberries begins in September and ends in February,” according to a U.S. Department of Agriculture report. (Gain, 2005)

Uses
Blueberries are sold fresh or processed as individually quick frozen (IQF) fruit, purée, juice, dried or infused berries which in turn may be used in a variety of consumer goods such as jellies, jams, pies, muffins, snack foods and cereals.

Beginning around 2003, pure or blended blueberry juice has become a popular product in Canada and the United States.

Nutrition
Blueberries, especially wild species, contain anthocyanins, other antioxidant pigments and other phytochemicals which may have a role in reducing the risks of some diseases, including cancers.

Researchers have shown that blueberry anthocyanins, proanthocyanidins, flavonols and tannins inhibit mechanisms of cancer cell development in vitro. At a 2007 symposium on berry health benefits were reports showing consumption of blueberries (and similar fruits including cranberries) may alleviate the cognitive decline occurring in Alzheimer’s Disease and other conditions of aging.

Most of these studies were conducted using highbush, hybrid cultivars of blueberries. Content of polyphenol antioxidants and anthocyanins in lowbush blueberries exceeds the values found in highbush blueberries.

140 grams of fresh blueberries contain 3 g of fiber . Additionally blueberries are high in manganese as well as vitamin K and have a low glycemic load per single 155 g serving 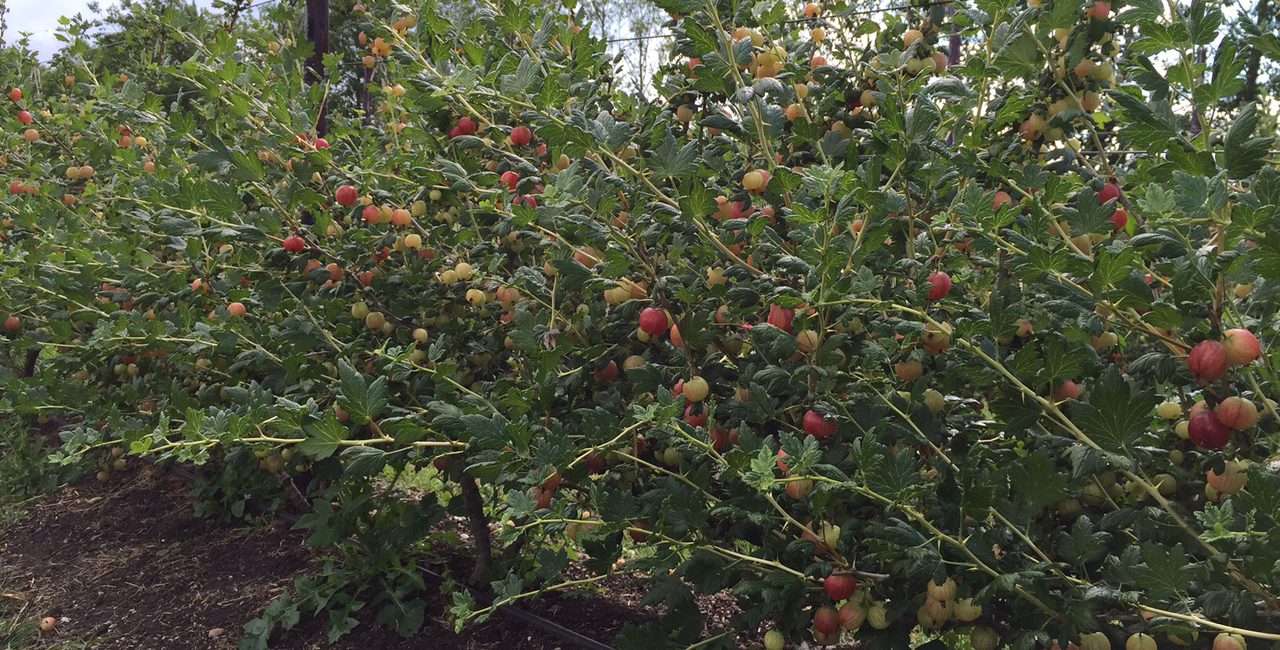